I Drank Too Much Kombucha and Made Myself Sick. 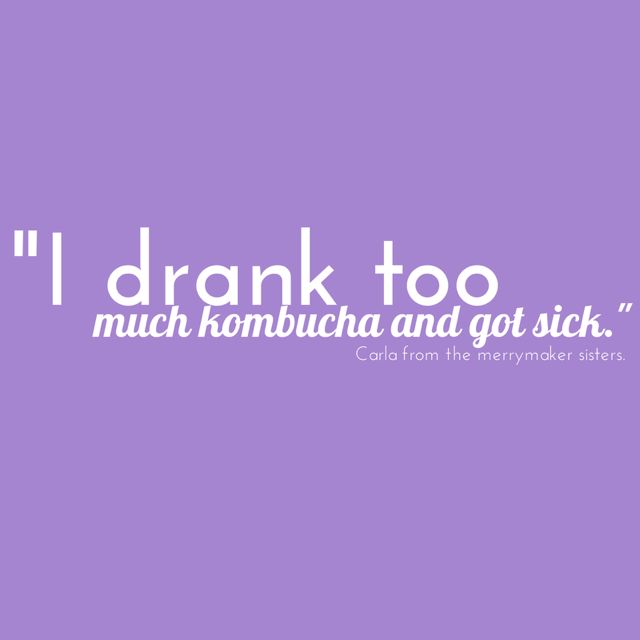 Have you heard of kombucha before? I can barely write about this without feeling sick, you see… I drank too much kombucha and it wasn’t pretty!

I hadn’t heard of kombucha until about 6 months ago when Emma introduced me to this weird and wonderful drink. It’s been around for over 2000 years and the Ancient Chinese called it the ‘Immortal Health Elixir.’ Intrigued? You betcha!

I tried it and loved it and kind of became obsessed with it. Not only for the taste but also the health and wellbeing benefits. It was getting a little ridiculous as we were spending $5.95 each a day on a bottle so with a little google searching and asking around we found out we could actually make our own! Woohoo! We were going to save money AND it was going to be our very own science experiment!

(we nick-named ours George)

And you simply make it by brewing some tea, allowing it to cool, adding your SCOBY to the tea and allowing the mix to ferment for 1-2 weeks.

So was I! Why sugar? Well, the sugar is like food for the culture in order to allow it to ferment (imagine the SCOBY sucking up all the sugar). Once the drink has fermented, almost all of the sugar is converted by the SCOBY and when fermenting is finished, there will only be about 2 grams of sugar per 250mL glass.

I drink it because it’s darn good for me! I could write a whole blog post on it but to put it frank it detoxifies the body, provides joint care, helps digestion and the two I love most is that it boosts your immunity and improves gut health (super important as we head in to the colder months!) and seeing as happiness and health begin in the gut, a drink that assists this is always good in my eyes. Basically what it does is it puts the body back in balance so it can work as it should!

Ok, let’s re-cap, it’s a fermented tea that’s made out of a weird pancak-ey looking thing, it DOES contain a small amount of sugar (but this is ok) and it has amazing health and wellbeing benefits. No wonder I wanted to drink it everyday!

We had our SCOBY and there we left it, fermenting and growing like a little baby. Weeks went by and the SCOBY grew bigger and bigger. Pretty soon I thought it might grow some legs and walk itself out the door. I was hesitant to try it as I was so used to the store bought kind, was there any way that I had done this whole fermenting thing wrong? Did I miss a step? Anyway, I took two sips and BLER, gross, yuck, it tasted like straight vinegar. Hmm.

The die-off. Ok, turns out you CAN get this fermenting thing wrong, well not wrong but a little bad. A simple google search and we’d maybe, probably, no MOST DEFINITELY over-fermented the sh1t out of our kombucha. The two sips I took meant that I got sick… really sick! Enter the stages of die-off and I’m going to explain this really simply (mainly because it’s the only way I myself can understand it): because the kombucha had so much good bacteria, it killed lots of bad bacteria in my gut. It killed too much too fast and my body couldn’t get rid of it. So instead, it just released all this dead stuff into the rest of body. Get it? Die… off? For 4 whole days I suffered nausea, headaches, fatigue (I napped… I never nap!), dizziness, diarrhea (oh, the SHAME!) joint pain, racey heart, fever, never ending chills and sweats… nasty, right? Right!

Turns out that this can also happen if you drink or eat too much fermented food. Note, this isn’t a warning to STOP eating/drinking fermented stuff it’s just a word of advice… stick to the daily recommended amount because die-off sucks big time and I wouldn’t wish it upon anyone!

Don’t let me turn you off trying kombucha (I have to admit I’ve slowed down on my intake and I’m only drinking the store bought kind, I like mojo, the perfect blogging beverage), Sarah Wilson, I Quit Sugar guru drinks the stuff every day and claims that it’s helped with her auto-immune disease symptoms, Paleo world leader, Robb Wolf also drinks it!

Over to you. Have you tried it? Made it yourself? Let us know your thoughts! Your journey will of course assist others on their way to a healthier, happier them.