Why I regret my nose job (and I’ve had two) 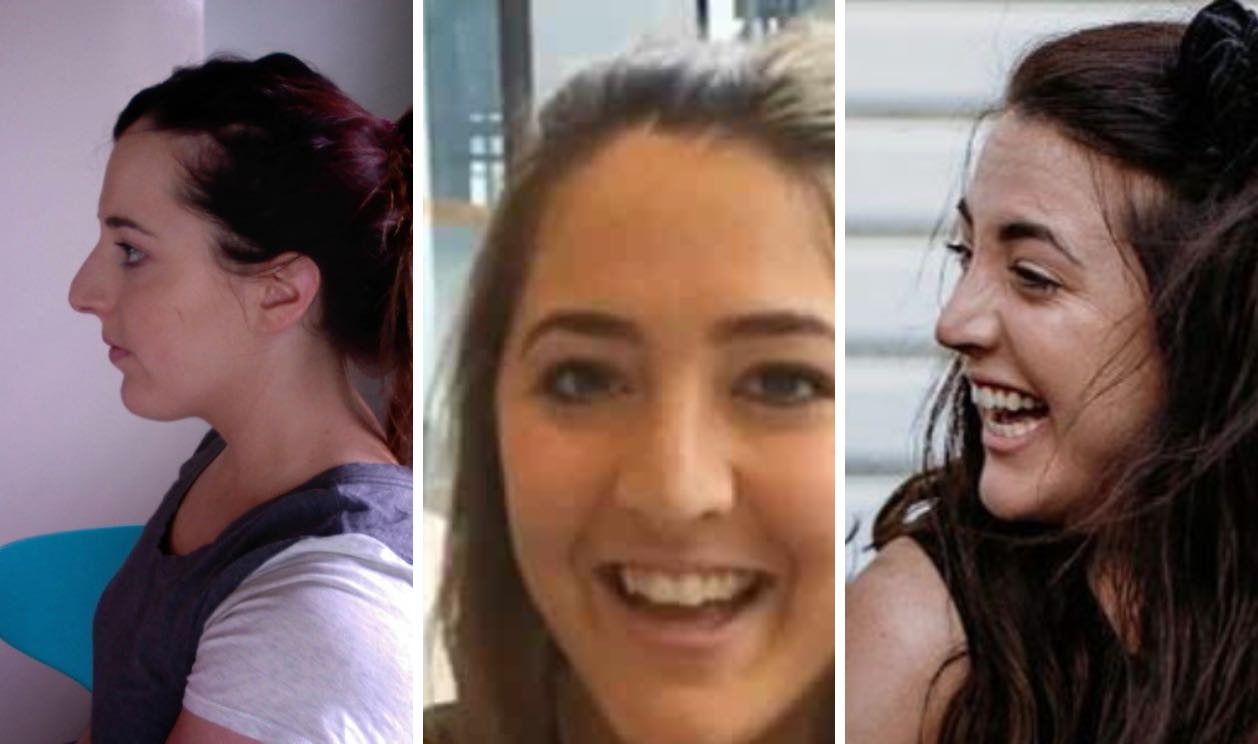 I was 13. In the line for the canteen (tuck shop). And Aiden turned around and said “get your big nose out of here.”

I looked to my friend Kate who was lining up with me and I asked her… “is my nose big?”

That was the day I realised I had a big nose. It was also the day I decided I had a ‘bad’ nose. A ‘wrong’ nose. An ‘ugly’ nose.

I went home that day and told my Mum.

And she said that she had a very similar story from when she was a teenager. In fact, the boy that said her nose was big was the reason she’d gone on to hate her nose for most of her life. She too thought her nose was bad, wrong, ugly… just because it was big.

And so, from age 13 I was always worried about my nose and how it looked.

I never let anyone take photos of me from side on… and if they did, I would request the photo to be deleted.

When Facebook came along, it was even worse. I’d always want the approval of photos before they got posted.

When I got my license and started driving, every time I stopped at traffic lights, I’d turn my head to the side just to make sure the people in the car next to me didn’t see my ‘offensive’ side profile nose.

It was a constant thought. A constant criticism of myself.

I’d look in the mirror and imagine shaving it off myself.

Then, when I was 20, the receptionist at the gym I went to got a nose job.

Wow, I thought it looked great.

I got the name of the surgeon and the very next day booked in for my first consultation… which really is a sales meeting with your surgeon.

I went to the appointment. They took photos of my nose. Side on. Top down. Bottom up. All angles. Below are the photos I emailed the surgeon prior to our sales meeting. 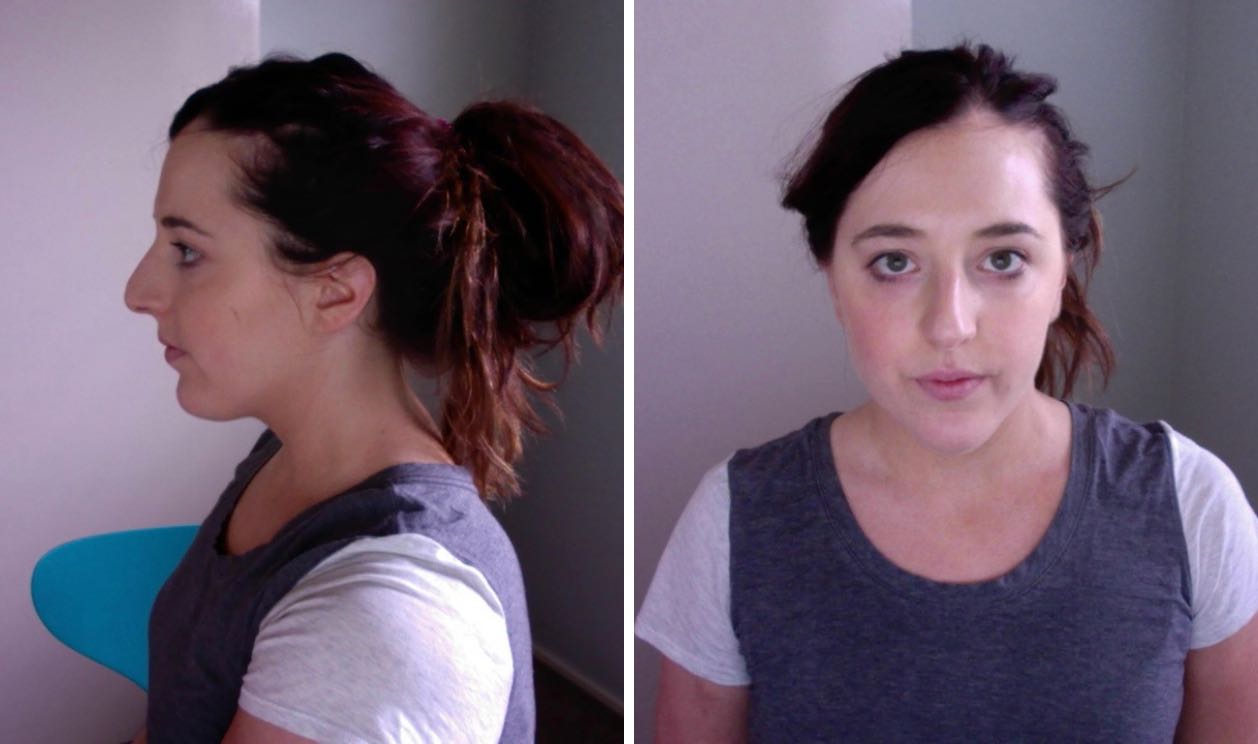 Then… as if by magic I watched the surgeon photoshop my nose right in front of me.

I remember saying to him, “I still want to look like me, so don’t make it too small.”

He printed out copies of the ‘new me’ so I could take them home.

They scheduled me in and that was that.

$14000 and my new nose was on the way along with true happiness and true confidence. This is what I thought back then.

I got the first surgery and it didn’t go well. The nose ended up swelling and healing terribly.

The nose job didn’t help anything! In fact, I became even more self-conscious of it… see below… Yeah they do warn you about the surgery going wrong or the potential of a second surgery that could be required… but really, they don’t warn you enough and they definitely don’t focus on it (why would they? No one would book!).

And so… after many return consults and countless cortisone shots into my nose (this is supposed to reduce swelling) I booked in again… for my second nose job… so he could fix the botched up nose job.

And now… here we are… 5 years after my second nose job. Me writing this piece of advice to you… you being the person considering getting a nose job.

Or maybe some other kind of plastic surgery. Or maybe… you’re just a little intrigued. And I am SURE there are some of my old classmates from Chisholm High who are simply plain old curious (hi!).

My advice to you? Think twice, three times, many times about the nose job.

From someone who has had not one but TWO nose jobs. I want you to think about what you expect this intense surgery to bring you… and then have a read of what I was so wrong about…

A smaller nose isn’t going to make you happy

I know you think it might. But for me, it didn’t. In fact, it caused me a lot of pain. It caused me the opposite of happiness! That first nose job really got me down.

You’ve heard or read in many a place, happiness is an inside job. Happiness most definitely does not come from a smaller or different-shaped nose.

I know you think that if you get the perfect nose (or insert some other body part) that your self-love and self-confidence will rise.

For me, this wasn’t the case. Before I got the nose job I really did think the nose job was going to be a magic pill for this. I also thought more people would think I was pretty (and back then… this was very important to me).

I thought, this is the ONE thing I am most self-conscious about, if I fix it… I’ll feel great and more people will like the way I look, I’ll get more attention.

After the nose job(s) I simply found other things to dislike about my body and things to ‘fix’.

It wasn’t until I found Yoga and the practice of acceptance that I finally learned to live in my body without criticizing or punishing it.

My nose job didn’t help this at all, it was the practice of yoga along with working on my self-acceptance mindset that helped this.

Getting a nose job is a waste of money

Seriously… there are SO many other great things I could have and you can spend your money on.

It was wasteful and now, in my opinion, selfish of me.

You might actually need more than ONE nose job

If you’ve taken it as far as seeing a surgeon and they HAVEN’T warned you about this… then please, please realise that you might end up getting a second (or third) nose job because the first one might not go to plan (like mine!).

That’s more time away from important stuff recovering and more of your money spent on your nose.

Yes, a nose job hurts (skip this if you don’t like graphic surgery talk)

Believe it or not, when they cut you open, peel back your skin, cut your nostrils off, shave your nose bone down and then stitch you back up… it’s going to hurt afterward and for a long time. My nose is STILL sensitive and it’s been 5 years.

Your nose will continue to swell up post-surgery (mine still does!)

I find that when I workout, go on planes, or it is super hot, my nose swells up. This is normal for people who have had nose surgery. They probably won’t tell you this so I am.

They also said it would make my breathing easier… and it hasn’t done that either.

You will miss your old nose

Contrary to your belief about your nose… you might miss your old nose if you get a nose job. I miss mine. It was part of me. It told a story of where my family and I came from and I just chucked it away. I miss looking like my mum! We used to have similar noses and now we don’t.

I know it’s morbid but the truth is, anytime you go under anesthetic it’s a risk. And I understand if there is a life-threatening reason, of course, you get the surgery… but when the surgery is optional, a choice, and only for external appearances, the reminder of all the risks and seriousness of the procedure is very important.

It worries me that plastic surgery is on the rise and that it is so easily available.

I absolutely understand there is a time and place, some plastic surgeons do wonderful things for people who need it.

But my message is for the people who might have a bigger nose than the current trendy button nose, maybe you have a bump, a ‘hook’, larger nostrils, a wide bridge.

A nose job is NOT going to solve your problems. It won’t build confidence like you think it might. It won’t make you happy (maybe for a minute… but it won’t last). It will hurt. It’s not an easy overnight procedure, there is a LOT of recovery. It’s a waste of your money. And YES, trust me, you will miss your old nose. Maybe not right away but you’ll miss it eventually.

Know that you are SO much more than your nose (or any physical part of your body). Your physical appearance doesn’t change the person you are inside.

You are your kindness, your courage, your smarts, your humour, your love, your compassion… you get it… what matters is the PERSON you are, not the body or face you are in.

More to come on this subject but for now, remember: you (and your nose) are amazing, just the way you are.

I went through the ultimate self-acceptance lesson and I hope that you learn from mine, rather than learning from yours.