New York, what a city! It’s a city filled with the wonderful and definitely the weird (extremely weird). Similar to any big city you’re going to notice some funky things… so of course we had to record them here! We spent most of our time in the Lower East Side so most observations relate to our experience down town.

Every street has its own personality and you get very different feelings every time you walk along each of them. Even when you walk along the same street the very next day… something new pops up, like a cafe, a tree, a painting. The city is actually alive.

The city has a crazy energy about it. It oozes inspiration but has the capacity to either inspire or drain. Super important to be weary of this when visiting. A couple of days we hid in our apartment. We just needed a break! 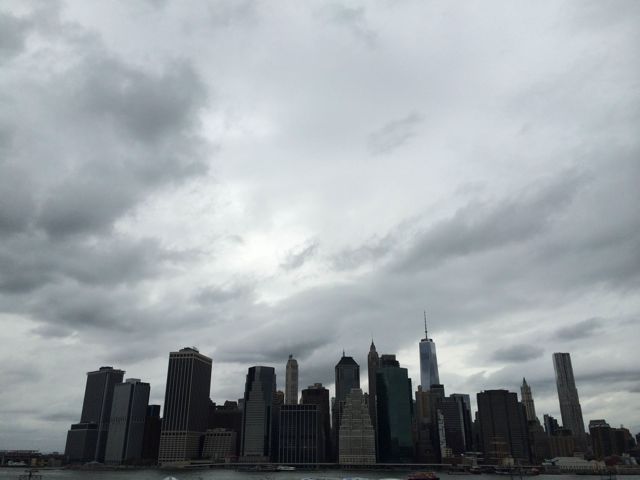 The smell. Ahh there were a lot of “um what is that funky smell?” moments. We’re guessing when you’re a local you just get used to the crazy smells! A mixture of subway, sewerage, deep fried, pizza trucks, rats (we’re assuming there are rats) etc. Oh and don’t get us started with the horse poop smells around Central Park. Yuck!

Times Square. Words can’t describe it, we literally felt like we were on another planet or in some crazy futuristic movie. Through our whole trip we spent about 30 minutes in Times Square… let’s just say it was more than enough!

Every street and building line looks impressive, including the derelict areas. Our phone is full of these photos! There is so much scaffolding on buildings and so much road works… seriously!

More on road works… the pot holes are huge and rarely have barriers… we looked down one and couldn’t see the bottom… be careful!

Brooklyn Bridge is amazing. Actually Brooklyn is amazing, be sure to visit! Puppies. There are loads of people with dogs. This isn’t the weird part, what’s weird is that the puppies poop on the street! There’s no grass. What’s weirder is that their owners drag them along while still pooping! We feel sorry for the NYC puppies.

People walk on the mega busy streets with their eyes glued to their phones (zombies much?!). It’s pretty bad! Add this with the the whole pot holes thing and it could get ugly. They even do it on Fifth Avenue (this is a very busy street)… what the!

Oh! Back to the puppies… some puppies wear shoes, yes, like shoes but for dogs. Which we kind of think is pretty clever, that way the dog doesn’t spread dirty city dust in to the owner’s apartment.

We walked everywhere in NYC. The subway is hot and we prefer the fresh air. The streets are like grids, so you end up chasing the walking man (he is white not green). We liked to play the game: how fast do you think we can walk to Hu Kitchen this morning?! A great incidental workout! We were walking an average of 16 000 steps every day!

There are a lot of places to eat like 42 000 different places. Take your pick!

Raw vegan is very popular, we went to 2 places before we were like “OMG we just want cooked food.”

Most meals are HUGE! So go halves or share an appetiser (Aussie entree) and entree (Aussie main meal) – yes, confusing. Actually one of our raw vegan meals was teeny and it was a complete rip off too! So maybe don’t share at the raw vegan places.

There is a Starbucks around every corner and nearly all of them have a line of patrons… weird! There are a million other cuter cafes, with free wifi AND almond milk!

New York City has every type of person. From the extremely wealthy and immaculately dressed to the extremely poor. Multicultural. Creative. Exciting. The best place in the world to people watch if you’re into that (pretty sure everyone is!). On the weekends there are heaps of people running, going to yoga and/or partying hard.

Kale is on almost every cafe and restaurant menu.

Cold brewed coffee is huge and yum. We’re hoping this will catch on for our Aussie  Canberra summer. New York City hasn’t got the memo about agave! It’s in all the ‘healthy’ cafes. Silly buggers!

Wholefoods Market is amazing except most of their food is filled with crap like canola oil and agave. This made us cranky!

Ambulance, fire, police sirens are a constant thing. But we actually saw no crimes or crashes or fires.

We felt very safe. Mind you, we weren’t partying late at night but still… we felt safe!

Everyone honks their car horns… lots of times for no apparent reason and sometimes they just held the honk down for what seemed like minutes. One could say New York drivers are a little impatient!

Heaps of people smoke. Cigarettes, cigars… gross! Clearly haven’t received this memo yet either! We were forever copping mouthfuls of smoke from people walking in front of us… so we were forever overtaking smokers.

Observations aside, we completely fell in love with most of New York City. There are definite parts of of the city we would skip: Times Square and Fifth Avenue during peak times!

But otherwise it’s a city filled with opportunity, pure inspiration and good energy! It was like a huge step outside our comfort zone and we all know this is where the magic happens! It really opened our eyes to a whole new world.

We know we are going to look back on this trip, the whirlwind it has been and be like ‘remember that time in New York when…’

#merrymakersdoNYC is brought to you by Raw Blend and Australian Blueberries.